I am famous for getting lost. Not just in China. Even in Iceland, which is not a huge country, I got lost all the time. When in London I took the wrong turns again and again, but the advantage is that getting lost you discover places you would not have dreamed of.

Yesterday I had managed, eventually, with the help of nice people and my guide, to find Quanzhou. I had also accomplished the impossible, to find my way home, back home and it was dark. I drove fast, got a fine, you cannot drive through the motorway in China at 132 km per hour or more, and not be fined, but that was ok. At least I was again in Min Hou.

The next day I left Min Hou at 12 in the afternoon and headed for Quanzhou. I knew how to get there, Oh, yes had been there just some hours before, no problem, it was all clear in my head.

The morning had been a packing and an organising morning. I like to organise but to be able managing that properly you need time. I did not have time. I had only few hours. I packed and unpacked. Suitcases and bags got full and empty again. Contemplated, and figured out that this was easy because I was traveling by my car. I packed food and food processor. My soy milk machine did also travel with me. Linen and towels would definitely be included in the apartment the school provided. Yes for sure they would be there, no need to pack them in bags. Of course I would not need buckets and floor equipment, but some small rags were nice, I like having my own. And in they went. Of course some clothes were also needed but maybe I could find a seamstress who could make some summer dresses for me. The heat was coming and it would be quite hot and humid in my new job. I was sure there would be someone in Quanzhou who could make something. I was too tall to get anything proper in the shops, and the last time I tried, my wallet, with all my papers and everything, was stolen. I lost my money and got no dresses big enough for the middle school where I was starting a new life, far from my home in Min Hou.

Well, I arrived to Quanzhou, managed to take the right turn from the motorway and I knew I was supposed to drive straight ahead for a long time and the turn to the right, somewhere, but had totally forgotten where. I stopped, close to a shop.

Calling the school, I had got a number yesterday I could use in emergency, and asking them for help was my only option.

The wonderful lady told me she would be with me within half an hour. I found a really nice lady inside the shop, who explained to the school lady where I was and she even told her where to get off the buss and how to cross over and she would easily find me. The shopkeeper was wonderful. 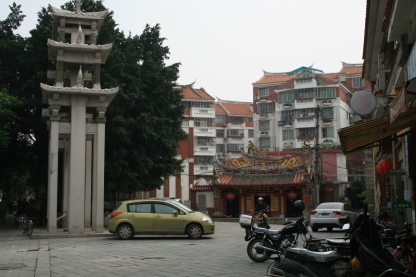 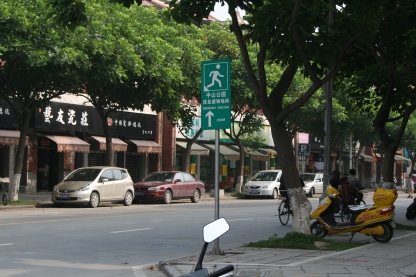 I waited, outside my car, trying to stretch my tired long legs and I received a lot of attention. A lot. There was a young couple watching me for about 20 minutes and of course the wonderful bike taxi drivers. There they sat on their bikes watching the foreigner, wondering if they should offer a lift. No, she was standing next to a car, which seemed to be hers, so no approach from them. Just a bit of a discussion and curiosity.

Usually, when I go to the supermarket in Min Hou, there are those bike taxi drivers, eager to get me on when I come from the supermarket, loaded with bags. Most of them know by now who I am and they have accepted I drive my own car, but when the newcomers are trying, everyone is having a blast and they explain to the new ones that the lady has a car. They all greet me and of course they know me after years of seeing the foreigner. I know these bike drivers are illegal but they seem to be left alone, and in fact they are just having a conversation sitting on their bikes, isn’t it.

The woman from the school arrived eventually. She explained, under her yellow umbrella, how she had taken the wrong bus and got lost. Hm, it was not just me. We drove straight to the school and met all the dignitaries there. The headmaster, the assistant headmaster, the department head and many others. Everyone was friendly and curious about the strange tall lady who wanted to live in their country.

They told me in many words, how welcome I was to the school and I was happy about it all. They asked how long I would be in the country and I explained that this was my final destination. Would I be willing to work for them? They asked me. I told them I was 65 and if they would hire me I would be willing. So far so good.

After a long meeting I was finally going to see my new apartment. The woman who picked me up took me there. I was looking forward to lie down and rest my tired bones after 2 days traveling on the motorway and driving more than necessary, just because I could not find my way.

We took 3 suitcases with us; the apartment was on the 1st floor, which was of course great. Just imagine if it had been on the 8th floor. I would definitely have died on my way up and you would not be reading this. Before me the inhabitant had been a man. I am not sure where from, although he may have been from Australia, a bachelor. This wonderful man left the school in the midterm and told them he was sick and could not continue. He was spotted teaching in Fuzhou ! The poor man had not realised that if one Chinese knows something, they all know.

I was knocked down when I saw the apartment. I could vividly see in my mind many days of hard work scrubbing. The fridge was the most disgusting thing I have ever seen. I told Anna, the lady who was with me, the one who picked me up, that I would not go to bed in this horror. The more we investigated the more obvious it was that the apartment needed cleaning from top to toe.