I had found the school, had a meeting with the dignitaries and now I was in the dormitory that would be my home for some time and at least the next 4 months.

We entered the apartment and the disgusting dirt was everywhere. I told Ana I would not go to bed in this horror.

Ana was the lady who took care of the foreign teachers, along with another nice lady. They were supposed to make sure the foreigners had everything they needed but also that they did behave according to the tradition. Of course there are rules!

So, I unwrapped the quilts, there were 2 in the apartment, and that was my contribution to cleaning the disgusting situation.

Ana called the cleaners. I was invited into the next door apartment. The hostess and the children took the foreigner under their wings and made tea. More people arrived, the dignitaries and the cleaner’s boss and I can’t name all the others. A lot of people and a lot of discussion. Talking and discussing and trying to find a solution was not an easy task. Back and forth they went and for a long time. Eventually, the conclusion was: Take the teacher to a hotel. She could sleep there during the first night and the apartment could be cleaned. I accepted and the cleaners had already begun and did a fine job. I could rest assure they would clean properly.

We left the suitcases on the bed. We took the sheets to a dry cleaner in the neighbourhood. Were they really not going to wash them? I asked Anna, and she tried to convince me that they would be washed with soap and water!

I was not quite sure, but nothing I could do.

After the dry cleaner the next task was to find a hotel. Where would I like to stay? How could I know that? This was my first time in Quanzhou and I did not know anything about the city. Would it be ok for me to stay in a 4 star hotel? I did not mind, it could not be worse than the apartment and 4 star hotels are often very good in China, like the Best Western in Fuzhou which had been my home for weeks when I arrived many years ago. So 4 stars were fine with me and I would have felt bad if the school had to pay a lot for my night in an expensive hotel.

We had a wonderful dinner, me and the dignitaries, and finally I got to bed at half past ten, totally exhausted, on a mattress like a rock, but they are like this here in China and I have been told that it’s good for the body, mostly for those who are old. Hm, mattresses like a rock for the old ones, for the bodies that suffer from pain here and there all the time? I don´t quite agree.

I decided that next time I went to Min Hou I would take with me to Quanzou every spare quilt and blanket I had in my house because the mattress in the apartment in the dorm was also like a rock.

After sleeping on the rock I went downstairs in the morning and to the lobby, asked for a map of the city. Usually hotels do have maps of the cities for their customers and of course I thought that in Quanzhou, which is quite a rich city, there would be maps for the guests. The ladies in the reception did not quite understand what or why I needed what I was asking for. Beside me, in the lobby, stood a lady, she was resourceful. She called someone and asked me to wait. After a while a man came. Perhaps a senior citizen and he turned out to be the lady’s father. He was a retired teacher and a geologist, traveling with his family to China. He managed to explain to the receptionists what a map was. No, no maps in this hotel, but they told him there was a kiosk in the neighbourhood and there I could get a map.

Can you imagine me going to the kiosk, maybe finding it, and finding my way back to the hotel? 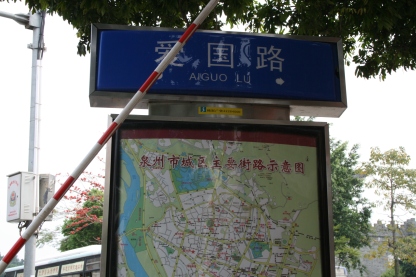 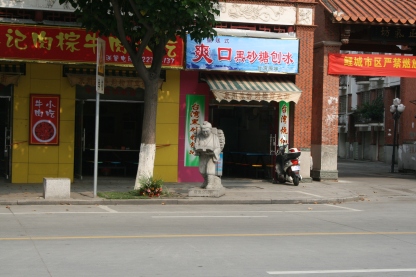 There was no way I would do this. The kiosk could have their maps but not me wandering about the city.

I was hungry and it was time for breakfast. No one there, except me. Perhaps not too many guests staying at the hotel and the poor staff panicking over the foreigner, worried about what she would eat. Of course they knew about the odd request about the map. They did not know that I loved Chinese food and had been in the country for a while!

When finishing my breakfast and leaving the dining room, the teacher came to me. He asked if I was alone and I told him yes. He told me he had sent his friend to the kiosk to buy a map for me to make sure I would not get lost. Isn’t this the sweetest thing you can imagine? There was a tourist helping a lone woman and making sure she would find her way in the new city.

I got the map and was in seventh heaven waiting for Ana to pick me up. I would not get lost with her as a guide. She came at about 11 o’clock and we took a walk to the apartment that was still being cleaned. The night before I had left my car at the dormitory.

I found a supermarket and we went into 2 hairdressers and asked if they could cut my hair. You know, my hear is not Chinese. Chinese hair is thick and a lot of it. Mine is fine and not very thick, just like an angel’s hair. My hairdressers in Fuzhou were always afraid they would make me bold, although I had found some who were brave enough but now they had closed and my hair really needed a cut. The city was hot and humid and my head gets hot and humid. I could not have water running down my face when in the classroom. Haircut it was!

I could get a haircut. Not a problem. The price was 480 RMB which is a robbery. I said thank you but no thank you, the price was far too high. The lads explained to me that this was a big hair salon and of course expensive.   They really tried to convince me that they were the best and showed me the luxury in the saloon. I just needed a haircut. I did not care if the saloon was small, as long as I could get the service I wanted and the service depends on the people, not the chairs, or so I thought. We found another one and the price was just 200 RMB. In Fuzhou I got haircut and colour for 80 RMB. Of course it would be more convenient for me to have a pampering here because during weekends there was not much time. Eventually I did give in and paid 200 RMB, but that was later. We continued our walk to the apartment and came across a shop selling contact lenses. There I found the same brand I had been using in Iceland. I had been looking for a long time for this brand and here it was just in front of me. Wonderful!

We arrived at the apartment and the cleaners had done a fine job, not finished yet but the air was foul and I opened all the windows to get some fresh in. They looked at me! Ana looked at me! Why are you opening the windows? they asked. To get the fresh air, it smells foul here, I explained. Could they not see this made sense, we open windows to get the air in? I did not understand what was wrong with them. Humouring me Ana and I left and the windows open.

We came back at 4 in the afternoon and everything clean, or so to speak. Maybe a bit in a corner here and there, but they were wonderful and did the job as well as possible. The floors were a bit wet but I could take care of that. Of course an apartment in this condition could not be perfect just in 2 days, it takes a long time and I was not complaining.

Although I could not understand why the floors kept getting wet, no matter how much I dried them. Where did all this water come from? The neighbour came by and I asked her why this was happening to me? Now I had been mopping the water for almost an hour and there was no end to it!

She looked at me.

She looked at the windows.

She looked again, at me.

I explained they had not, I had.

Oh, you cannot open the windows there is so much humidity outside and that is why you are mopping the same spot again, you turn around and it is wet again, she told me.

We closed the windows and I managed after some hours to get my floors dry. The beginners’ problems!

I had clean bed sheets, not dry cleaned and went to bed. The bed was broken.

A man came to fix it some days later. The next day someone came to change the water machine which was also broken. We had to filter the water. Eventually I got something to cook my food on. It was impossible not to have a cooker; I needed to cook my herbs every day. They were my medicine.

There was a computer in the apartment but the disk totally packed and the computer slower than the devil. I was going to use my own. I connected the cable to mine but nothing worked. No password. I connected to the other computer again and did it wrong. Had to get a man to fix it. He loosened the screws at the back of the computer, took the back away and managed to get the cable free. How could this happen? How could I connect a simple cable to a computer in a wrong whole and the back needed to be screwed away?

Maybe it would be easier just to buy another cable for my computer in the future. Then I would not have to crawl like a worm under the table to get the other one out. The one from the school computer that needed to be used for both the computers, I thought. I hated to use the keyboard which the man had used, the one who left because he was sick and had to stop teaching and was now teaching in Fuzhou! The one who left the apartment like a filthy testimony about his tidiness. By the way, there was a lot of bear in the apartment, which the former inhabitant left behind and even proper glasses but plates and other cutlery was limited.

The apartment was now clean, the computer was working, my computer, and it was time to go to the school and have another meeting with the dignitaries about my contract. No problems there and I would start my work very soon! Or so I assumed.