Since the wonderful couple that was getting married were Christians they did not consider themselves married, even though they had got the Chinese papers, until after the ceremony in the church.

The ceremony was supposed to start at half past ten. Different sound makers had  arrived to welcome the bride. Someone came running to the kitchen and told me to get to the church because the bride would be arriving any minute. At that moment I had 3 pots full of uncooked food and no gas or electricity.  I could not leave and I would miss out on the wedding. I knew there would be a video and thought I could relax later. I pictured myself sitting in a cosy chair in my living room and watch the ceremony. Maybe three days later or there about, when I had recovered from the cooking. How simple minded I was.

The gas arrived at 11 o’clock but the bride had not.

I turned to my cooking serene and accepting that I would not participate in this ceremony.  At 12 everything was ready and I had put the pots into duvets to keep the food warm.

Oh, did I mention that the kitchen was under the blue sky and all kinds of animals, dogs, cats, mice and more lived in the kitchen? Very nice and homely but perhaps not quite what you would expect from a kitchen where you make food for hundreds of people, and most likely not according to any rules, but who cares. The food had to be prepared and cooked somewhere.

I got the recipes from the groom. He expected me to use 3 kg of MSG which is quite popular in Chinese cooking and huge lobbying in the TV how good MSG was and is for the health. Of course I was not going to poison the guests so no MSG went into my cooking, but everyone liked it a lot. When the pots had been tugged in the duvets I strolled down to the Church. 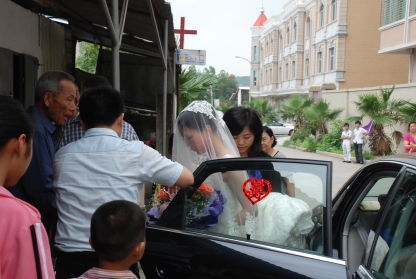 Just few minutes walk. And guess what, isn’t the car, the brides car in sight and I even managed to see the bride get out of it, really beautiful and of course in a white western dress. The groom and the best man stood at the altar, waiting. The altar was in fact just a lectern and not an altar, the ordinary ones. The priest was dressed in a yellow shirt and next to him stood an interpreter because some of the guests did not understand Chinese.

Then began the longest wedding ceremony I have ever attended, with  speeches, video show and song. The priest did not bless the couple but the groom put a ring on his loves finger and she on his. After the rings they should kiss. That took a long time. The bride did not want to kiss but eventually they managed. I have no idea if they are married according  Christianity. I asked why the priest did not bless them and was told that this was the Chinese way and indicated I should not be interfering with things that were not my business at all. I did not push it.

I wondered why they invited so many Chinese to the wedding. It was explained to me that the Chinese should see the Christian way and they might even be interested to join the group, the holy ones. Every opportunity to save the heathens, used to its fullest.

The whole ceremony took 3 hours and the food waited patiently in the duvets. Tables were set up outside but then it began to rain and everything moved into the church, which was fine with me, even though I had cleaned the tables and everything was shining. Why are you cleaning the tables? someone asked. Seriously!

Everyone liked the food but the cook completely dead. During the night there was a thunderstorm and lightning but the cook slept  like dead and had no idea about the raving angry weather or screaming air conditions in next apartments, which usually kept me awake.  No I was dead.

The next day the groom asked me why I did not give people the soup? Well, the soup was in the pot on the floor. Next to the plant, the big pot. How could I remember everything? I made sure everybody was eating! That should have been enough, shouldn’t it? I forgot the bloody pot. There was soup for 100 people and the groom could have eaten it for a month at least, with his wife. But no, there was no MSG in it and he noticed. Oh my I totally blew it, but did not care, it was over and I was never going to do anything like this again. I was finished letting people use me.

The couple is going on a honeymoon to Canada and there is going to one more ceremony. I wonder if the couple will be happy for ever and ever. They should at least after 3 ceremonies. One Chinese, and 2 Christians. That should be enough to tie them together for ever, should it not?

I asked the groom,  before the cutting and cooking, if he could get someone else to help him because I had a broken wrist. No, that was not possible. But, when the idea surfaced to ask me to help the new lady to cook for her foreign guests in their home the next day I said NO and ran.

I was invited to the dinner in their apartment, the one I refused to help with. There was a lot of HALELUJA there. Everything was halelujaed and I felt like an outsider. I got off, downstairs, as quick as possible. This was not my piece of cake.

I do blog about different matters that interest me. By reading my blogs you might get to know me a little bit but fake accounts and followers will be deleted immediately. There is a lot of fake accounts these days and people don´t hesitated to tell you all kinds of lies. Please be careful when you accept a friend request or if you get a call from Whatsap. View all posts by hulda9